“Urban planning guides and ensures the orderly development of settlements and satellite communities which commute into and out of urban areas or share resources with it. It concerns itself with research and analysis, strategic thinking, architecture, urban design, public consultation, policy recommendations, implementation and management.” – Wikipedia

For several years, I have a fascination in mapping locations within my area. Are you using FourSquare? I’ve liked the app since it started back in 2008. You can add suggestions about the food, the ambiance and how to get to the restaurants and establishments. It was a great community, earning badges is also one of the features of the app that made it even more appealing.

It changed over the years, the app evolved, and it was not that appealing to me anymore. Although I still use it and find it useful, I wanted to go deeper and learn more about online maps and how it was developed. I’ve also used google maps several times and though I find it useful in Singapore and other places for the past 8 years, I realized that the data indicated in the map is not accurate. Later on I found out that the maps have licenses and it’s not free.

After moving to the Philippines it’s quite a struggle finding locations as the city is a bit chaotic and there are street names that are identical in different parts of the island. I was also eager to be part of a volunteer group. After several talks with different people, I found that volunteering for Open Street Maps is a great idea which completely matches my interest in mapping locations.

The transportation system in Manila is good but from an outsider, it is chaotic. First because there’s only a few train lines, and most of Manila is built on roads. Second, the river is a great way to move people from one location to another without having to worry about traffic, but it doesn’t have an online map. Third, there are lots of modes of transportation: bus, jeepney, taxi, tricycle, private vehicles and trucks, all contributing to the congestion of roads.

So how do we resolve this congestion? Urban planning. With the help of online maps, we can assist urban planners build better roads and infrastructure for people. Put up LED displays on main roads to warn motorists of heavy traffic and provide suggested routes. See buildings that are no longer in use and make use of the land for community parks, schools, or libraries. 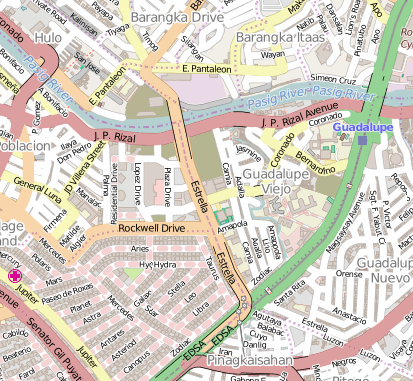 As you can see, the roads are well planned out, but it’s very far from the MRT. Side walks are also not as great which is why people would prefer to just take a cab, take a jeepney or a tricycle to go somewhere. Despite these barriers, I also see a great opportunity. It’s to let investors see that there is an opportunity for growth in building subways and improve the train system.