There’s very few people that I know find Moscow appealing as a great tourist destination. For me, it has always been intriguing. I went there on the right time of the year when it’s not so warm and not too cold. It was a nice September autumn weather, perfect to walk around and enjoy the city.

I arrived Moscow in the afternoon. Checked in, had a few hours of rest and then went to one of the local bars. While walking, I saw paintings on the wall. Classical portraits with frames decorated on the walls of the building. Although I don’t understand most of the characters at first, it looks like an ad for the museum and it’s current exhibition. It was strange that it looked like a real art piece from the museum and it’s right there out on the streets for everyone to see.

Later on I observed that there weren’t any streamers or posters displaying ads as you would normally see in any city. I later found out from a local, that it was banned from the streets of Moscow and that most of the walls are either covered in art or displaying art. Advertising were digitized. We went to Time Out bar on our first night, which is a rooftop bar not far from my hotel. It looks like an old building remodeled to look more modern. I like the painting right at the ceiling. It reminds me of classical Europe.

It has that familiar grandiosity to it but less flashy compared to the rest of the art in Europe. We had a few drinks here and saw a beautiful view of the city. The wind was cold (7 degrees C) we had to go back inside to finish our drinks.

The next day we went to Winzavod. Winzavod (Russian: Винзавод; “wine factory”) is a modern exhibition centre in Moscow, Russia, it opened in 2007. It is located in a complex of seven industrial buildings from the late 19th century including the former brewery (and later wine factory) called “Moscow Bavaria”. It was a bit unfortunate that most of the galleries were closed during our visit. 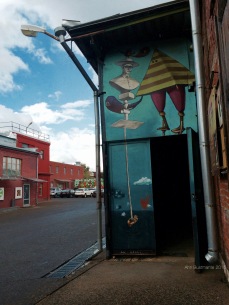 There are lots of wall murals. My friend in instagram, Elena Truskova,  mentioned that it is one of the trendiest places in Moscow where most young creative people flock. It reminds me of Cockatoo Island, an old industrial warehouse converted into art galleries and exhibition spaces. Inside the compound there are a few coffee shops where you can enjoy a cup of coffee or eat after touring the galleries. It’s a worthwhile visit, make sure to check their opening hours before you go just not to end up getting disappointed. 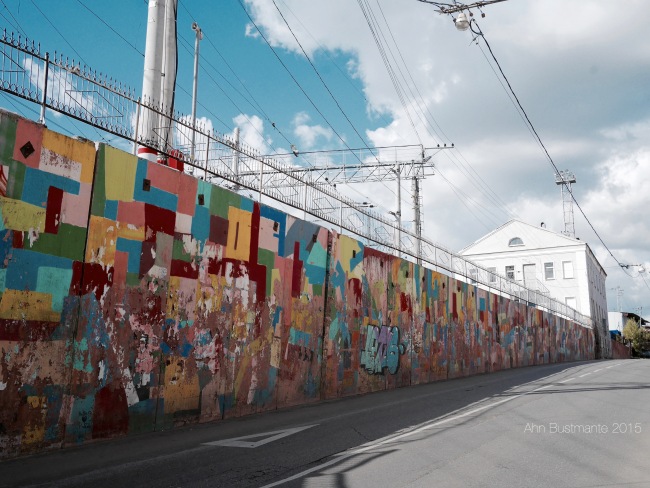 At the bridge right outside Winzavod 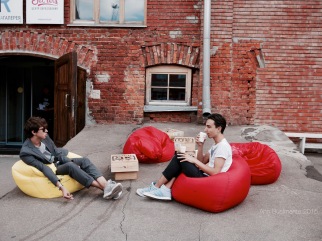 Young and hip Russians at Winzavod

I’ve always had a fascination with wall art. In fact, I was looking forward to see some of them during my visit. Researching for locations, I chanced upon Mike Lanin who’s into cycling and marking wall art locations in Moscow. I got in touch with him and he was very kind he shared a map of all the wall murals in Moscow. He says he’s been marking them off a location at a time. Some of the wall murals are legal, some are not. 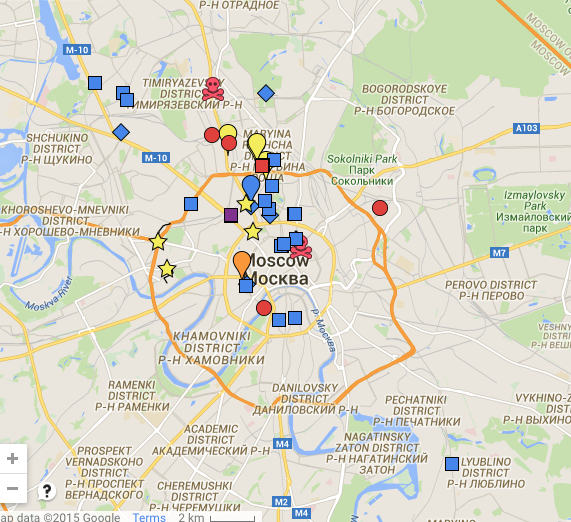 From the map you can see that most of the locations are spread out all over Moscow. We have limited time so we decided to go to the nearest wall murals at the center of Moscow. Moscow alone has a huge land area (2,511 km²) and it requires a few days to explore each one of them. 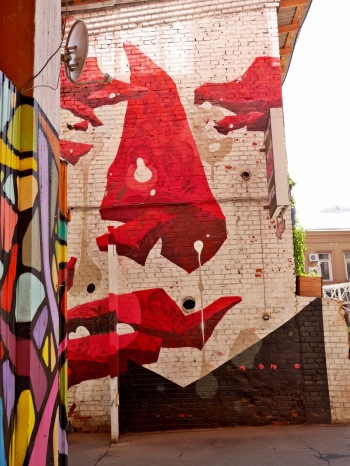 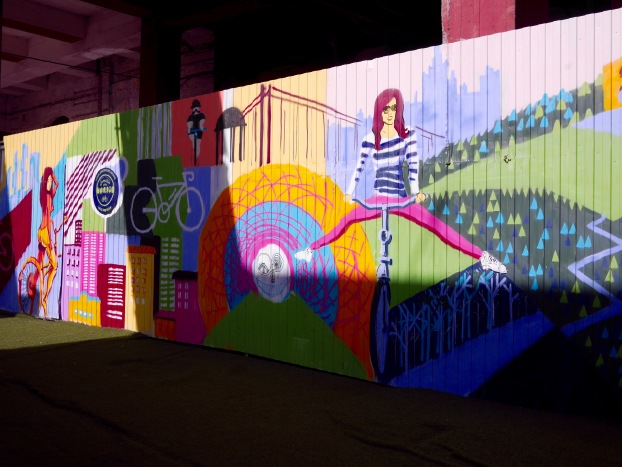 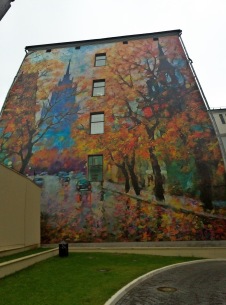 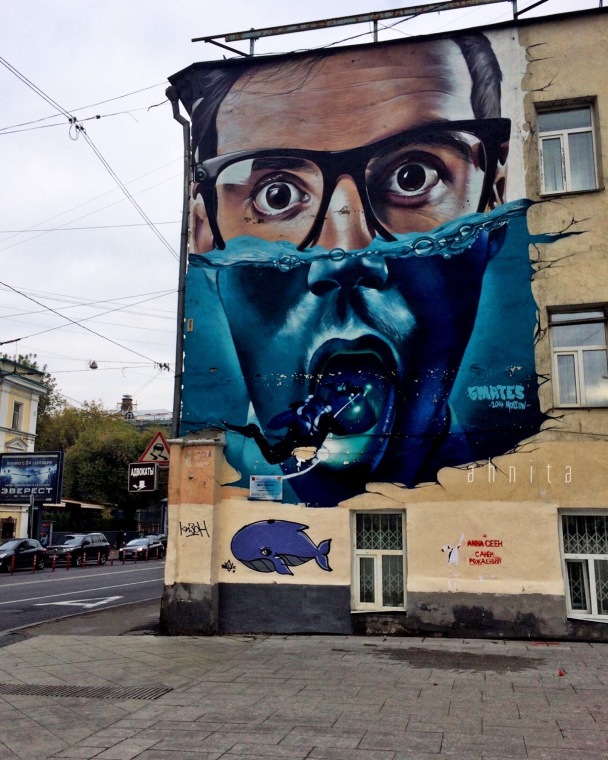 Most of the wall murals extends from the top to the bottom of the wall of a building, it’s great to look at even from afar. Imagine at winter, when everything is grey, everything else looks dull and cold. It was a certainly a great idea to remove all the ads from the streets and replace it with massive wall art.

From Red October, we walked towards Gorky Park to see Garage Contemporary Art Museum. It was quite a distance that upon reaching Gorky park, we were so delighted to see massive Bean bag beds across the park. We had a short nap, it was comfortable with the cool breeze around you, birds chirping. It was very relaxing. Gorky park hosts several events throughout the year. My friend Mike told me that there are a lot of hipsters flocking this area. 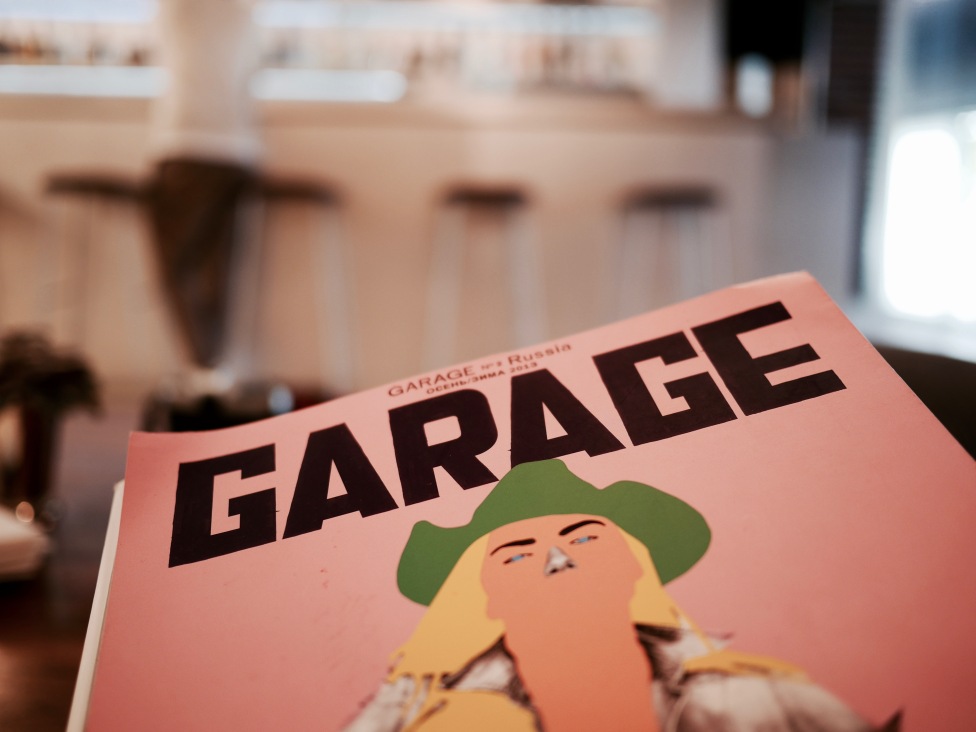 Garage Museum of Contemporary Art, also referred to as The GARAGE Museum (formerly The Garage Center for Contemporary Culture), is a major art museum located in Gorky Park. It is the permanent home of an expanding collection of modern and contemporary art. It also features special exhibitions throughout the year. Vadim Zakharov was on exhibit during our visit. Adult tickets is on sale for 400 rubles, students (18–26 years old) for 200 rubles, and children (11–17 years old) for 100 rubles. It’s a worthwhile visit. After your tour, visit the cafe and try their eggs Benedict. It’s fantastic! 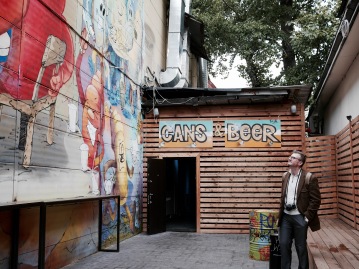 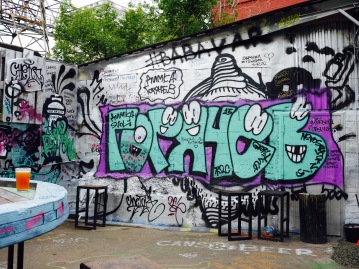 Mike (my Russian friend) recommended we go to Cans and Beers knowing that I like street art and draft beer, it was the perfect combination. We head out one afternoon for our “beer o’clock” picked a brew and went to the back area where they have all the graffitis from their guests. They gave us two cans, different colors and went wild with it. I really enjoyed this bit in our trip because never have I seen a country viewed by the world as so strict, but here we are at a pub, encouraging people to create something and paint their world in color.

Everywhere in Moscow you see art and there’s an abundance of it. Some locals think some of the statues are ridiculous, but it makes Russia unique and beautiful. It makes me think, we should have this too in the Philippines because art makes people feel even more alive. It makes us inspired and less stressed.